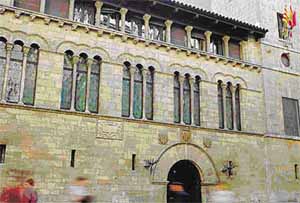 Palau de la Paeria, the best example of civil Romanesque architecture in Lleida, is also one of the most emblematic monumental buildings in Catalunya.

The facade overlooking the River Segre is Neoclassical in style and in 1929 it was restored adopting a Neomedieval style. The result is a perfectly balanced construction.

Built at the beginning of the 13th century, it stands on different historical "layers" that some local technicians and others working for Universitat de Lleida have unveiled after several excavations.

In 1383, Senyors de Sanaüja, owners and forerunners of the current building, transferred the palace to the city so that it became the seat of the municipal government. Nowadays Paeria, known by Lleida's inhabitants as the home of the "paer en cap", houses many treasures that reflect the city's identity. The word "paer" comes from the Latin term "patiarii", which means "man of peace". This moniker was adopted by the city mayors when in 1264 King Jaime I granted Lleida's former consuls this privilege.

The City Hall is situated in the heart of Eix Comercial. La Morra (former 16th-century prison placed in the basement), the city archive and the inner courtyard are some of its masterpieces.

This Gothic altarpiece from the 15th century (1451 - 1454) which decorates the main room -where civil weddings are held- was originally hung in the altar of the Paeria chapel. This work has, as the main figure, the Virgin flanked by the archangels Gabriel and Michael. The Virgin, surrounded by the four "paers", symbolises her protection over the municipal government.

In 1486 the Paeria basement was rebuilt in order to make a prison with separate rooms for men and women. The room for those criminals with a death sentence is known as La Morra. The stones that make up the prison walls show many graffiti which date back to the 16th or 17th centuries. They represent crucifixion and keys as symbols of religious faith and lack of freedom.


The City Archive and Carta Pobla

The historical memory of the city is preserved in this Archive. There is a beautiful Baroque wooden wardrobe known as "Armari dels Privilegis". Another treasure found in the Archive is "Llibre dels Usatges", which dates back to the 14th century and is decorated with graceful miniatures. However, the most important historical document catalogued in the City Archive is certain to be "Carta Pobla", the first constitution of Lleida's inhabitants, which dates back to 1150.

The excavations under the plaça Paeria produced artifacts from the 2nd and 1st centuries BC, although this area is thought not to have been inhabited yet. The oldest remains are from Ilergetes times and belong to the foundations of a rectangular construction from the 3rd century BC. In the 5th century, above the remains of those foundations and after the previous century's floods, a first short-lasting construction was built, but it left behind several bone tools, ceramics and bronzes from that time.

The excavations from 1985 to 1989 resulted in the discovery of a stepped construction, which is thought to be from the 10th century and which housed public baths from the "andalusí" times. The dates are concluded from a document from 1208 (60 years after the Christian conquest of Lleida) in which Mascarell de Sanaüja bought some baths in the Pardinal area -name that was given to the place at the time.

The current building was designed in 1214 by Arnau, a descendant of the Sanaüja family. The well situated in the inner courtyard of the building is supposed to be from the 13th century. The transfer of the building to the municipal government enabled different uses of the basement; first, it was used as a cellar and between 1486 and 1816, as a dungeon, until its later transfer to Església de Sant Martí.