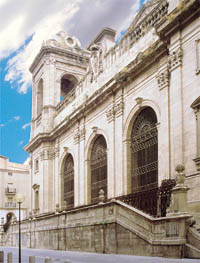 Between 1761 and 1781 the Catedral Nova was built thanks to the city inhabitants, King Carlos III and bishop Joaquín Sánchez's contributions. Baroque in style and with many French academic Classicist features, it is located in the heart of the shopping quarter opposite the former Hospital de Santa María.

The staircases, with three pointed iron gates and decorated with side spires, give way to the main entrance, which boasts the Borbons coat of arms at the top. The three-aisled inside hides the slim Corinthian colonnade which supports the pointed arches.

The Baroque choir, by Lluís Bonifas Massó, was built during the Spanish Civil War (1936). The church boasts an image of the Virgin of Montserrat "la Moreneta" - patron of Catalunya and pilgrimage destination on 27th April - made by Josep Obiols. The Virgin "del Blau", whose special day is 2nd February, is also worshipped. According to the legend, her name comes from the bruise her sculptor made by throwing a hammer at her forehead when he saw that, while he was away, one of his followers had finished her, significantly improving on his master's artistic capabilities.